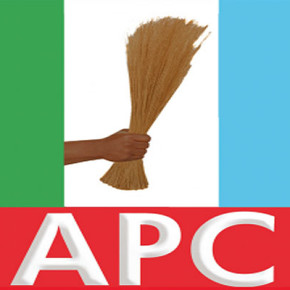 The All Progressives Congress has dissolved the executive committees in Imo and Ogun states.

Also dissolved were the local government and ward executives in the two states.

Their dissolution formed part of the resolutions reached during the National Working Committee meeting presided over by the National Chairman, Adams Oshiomhole, in Abuja on Tuesday.

In their place, the NWC would inaugurate caretaker committees that would superintend over the affairs of the party in the two states ahead of the general elections.

Oshiomhole emerged from the meeting on Tuesday around 7pm and quickly entered his waiting vehicle to avoid journalists who had waited the whole day for a briefing.

When approached by journalists at the entrance of his car, the former Edo State governor said the National Publicity Secretary, Mallam Lanre Issa-Onilu, who had earlier left the venue of the meeting, would brief them.

“The NPS will brief you,” he said.

Recall that Governor Ibikunle Amosun (Ogun) and his counterpart in Imo State, Rochas Okorocha, and Minister of Communication, Adebayo Shittu, had vowed to work against governorship candidates in their states.

A member of the NWC told our correspondent that the meeting decided to dissolve all the party structures in Ogun and Imo states to stem the conflict of ideas being promoted by the two governors.

He said, “The two governors have sponsored their preferred candidates on the platform of other political parties while they are holding on to the APC’s senatorial tickets.