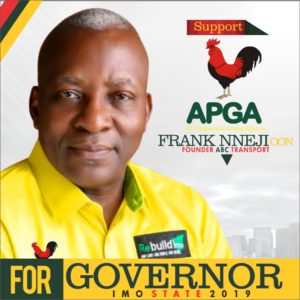 Today, we have heard that APGA has put forward Senator Ifeanyi Ararume’ s name as the winner of its Imo gubernatorial primaries.

As you know APGA gubernatorial primaries were slated for the 5th of October. When they could not hold that day for reasons unknown to us, they were shifted to the 6th of October. Again the event did not hold on that day. It was shifted to Sunday October 7. We mobilised to the venue and waited for the officials. We didn’t see anyone until nightfall when we dispersed. At about 10pm we got news that the primaries were taking place at a location different from the one earlier advertised. We also learnt that there were no APGA state or national officials in attendance. No other aspirant participated in the said primaries except Senator Ararume and his supporters.
It is unfortunate that our dear party we all believed in has been dragged down to such depths
I thank everyone who has supported me in my bid to clinch the governorship ticket of APGA, a party which I believed was keenly interested in uplifting the Igbo man, and the Imo man especially, politically and economically.
My desire to use my talents and resources to arrest the decline of Imo state is what motivated me to push aside my reservations about running for political office.
I have lived and worked here for thirty five years, and I know that Imo was better than it is now and that it could be rebuilt to even surpass what it used to be.
My political journey began almost two years ago when I decided to develop a Blueprint or Template for the development of Imo state. My intention was to hand the document over to the incoming administration to implement for the benefit of the people
To this end, I assembled a team, including myself which met in my house almost every weekend for about forty weeks during which they interacted with experts and consultants from various places and organisations including the Ford foundation. These experts and consultants identified the various problems facing our state and proffered solutions. The areas covered included, Health, Education, Agriculture, Revenue Generation, Pensions, the Civil service, the Judiciary, Job creation, Diaspora engagement, Infrastructure and Tourism to mention a few.
At the end of it all we came up with a beautiful and comprehensive document, a veritable road map, which if implemented would change Imo state for the better.
Members of the team pointed out that whoever the document was presented to may not implement it at all and would rob Imo people of its benefits and urged me to run for office to implement the Blueprint. That is how I got involved in the Governorship race.
I chose APGA as my vehicle because I believed in its ideals of uplifting the Igbo man.
I proceeded to set up my structure and began my campaigns. You all can testify that I worked very hard in this regard.
I was motivated and impressed by the interest my candidacy generated and its acceptance. Many people told me they were going to join APGA because of me, and indeed the number of APGA members increased after I joined.
I have no doubt that if things had been done properly, and a free and fair selection process had been put in place by the powers that be in APGA, I would have won the primaries given your immense support and goodwill.
Unfortunately, we all have been let down by a party which was unable to organise decent, acceptable and rancour free primaries at all levels.
I share in your disappointment and urge you all to keep faith as events unfold.
Once more, I thank you all for your support and belief in me and my aspirations and may God help us to get the kind of leadership that will uplift IMO.
May God bless and keep you all.