You are here: Home › NEWS › COVID-19: Uzodinma lends Support to the Church 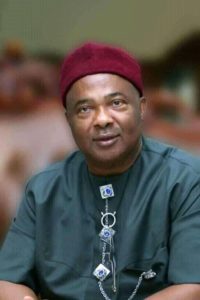 In a bid to cushion the effects of the lockdown and its economic effects on the people, Governor Hope Uzodinma of Imo State has continued in his efforts to provide succour to the people through the provision of palliatives to various faith groups and Organizations.

In the recent move, the State Government has donated 4000 bags of 10kg rice, 1000 tubers of yam, 40 cartons of tomatoes and 40 cartons of vegetable oil to the Catholic Arch-Diocese of Owerri to assist them in the provision of food items to the poor and vulnerable group of the Arch-Diocese.

In a similar vein, the Anglican Arch-Diocese of Owerri and Christian Association of Nigeria (CAN) have also received donations of the same magnitude from the State government for their members.

The Anglican Arch-Diocese of Owerri has received 2000 bags of 10kg rice, 1000 tubers of yam, 10 cartons of vegetable oil and 10 cartons of tomatoes.

The Christian Association of Nigeria (CAN) got 100 bags of 25kg rice, 1000 tubers of yam, 10 cartons of tomatoes and 10 cartons of vegetable oil.

The Governor while appreciating the efforts of the Churches in assisting and partnering with the government in the numerous task of stopping the spread of the Covid19 pandemic in the State, enjoined them to ensure that the items get to those they are meant for.

Governor Uzodinma further solicited the continuous co-operation of the Church in the fight against the Covis-19 monster and prayed for God’s divine intervention to end the pandemic sooner than later.