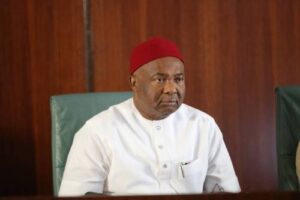 Following disturbing report on the activities of a group of militants that unleashed mayhem at residents of Orlu in Imo State, killing and maiming innocent citizens in the process, Governor Hope Uzodimma has imposed a dusk to dawn curfew in the affected areas just as he ordered the security agencies to fish out the perpetrators without fail.

He said the curfew is an interim measure to immediately restore the peace in Orlu area. It will start  at 6 pm and end at 6 am daily and affects; Orlu, Orsu, Oru East, Oru West, Ideato North, Ideato South, Njaba, Isu, Nwangele and Nkwerre local government areas of Orlu zone.

Addressing a news conference on the matter on Monday, Governor Uzodimma said the perpetrators of the carnage were out to paint a picture of near break down of law and order in Orlu area, noting that government condemns in its entirety acts of extreme hooliganism and brigandage.

The governor advised the residents of the affected LGAs to cooperate fully with the curfew as anyone who violates it will be treated as a suspect.

Governor Uzodimma said that security agencies have been directed to carry out a 24-hour patrol and that law abiding citizens can go about their businesses without fear of molestation.

The governor further condoles with the families of the bereaved and assured them that those who committed the heinous crime against them and their loves ones will not go unpunished.