You are here: Home › NEWS › Uche Nwosu will have my support if he declares for governorship – Okorocha 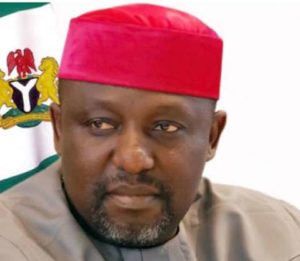 Imo state Governor, Owelle Rochas Okorocha has said that if his Chief of Staff, Hon. Uche Nwosu comes out to contest the 2019 governorship election in the State, he would support him on the ground that he has all the qualities of an ideal leader.

Read excerpts from the press statement made available to IMO STATE BLOG:

Governor Okorocha spoke when the officials of the All Progressives Congress, (APC) and leaders from Owerri Municipal Council visited him on Monday, February 12, 2018 at the Government House to urge him to encourage and support Chief Nwosu for the governorship of the State in 2019, adding that the monumental achievements of the governor could not be left in the hand of any-how person.

The governor stated that although the Chief of Staff has not told him that he wants to run for the governorship of the State, but if he comes out he would support him, adding that he has known Uche Nwosu over the years but does not know his parents and described him as an honest man who, whatever he tells you in the morning is what he will tell you in the evening.