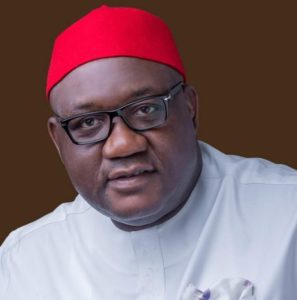 As party loyalists and Imolites continue to applaud the decision of the *Comrade Adams Oshiomhole* led National Working Committee (NWC) of the All Progressives Congress (APC) in the dissolution of the Dan Nwafor led State Working Committee (SWC), one of the finest Federal Lawmakers in the country and the Senator Representing Imo North in the Upper Chamber of the National Assembly, *Distinguished Senator Benjamin Uwajumogu* has commended the party leadership for rescuing the party in the state from the stranglehold of an Emperor in Imo state and repositioning the party leadership in the state to win the upcoming general elections in 2019.

Describing it as timely and a positive development for the party in the state especially as 2019 general elections approaches, the former Speaker of the Imo State House of Assembly, affirmed that with the scrapping of the Dan Nwafor led executive, the party will now have a *human face* to approach the people and seek their support and votes which will guarantee the party’s victory at the polls.

Senator Ben Uwajumogu who is visibly happy at the new dawn in the party extolled the uncommon courage of Comr. Adams Oshiomhole to look beyond the interest of an individual whose aim was to satisfy his personal interest without recourse to the sensitivity and consideration of thousands of party faithfuls who according to him are the major stakeholders of APC in Imo state.

He reiterated his earlier belief that the party in Imo State was not a one man property.

Sen Uwajumogu noted that the timely intervention of the NWC of APC to salvage the party in Imo state should be commended by all and called on the new leadership led by an astute politician, Chief. Marcon Nlemigbo to ensure that they discharge their duties expeditiously and work assiduously to deliver the candidates of the party at all levels during the 2019 general election.