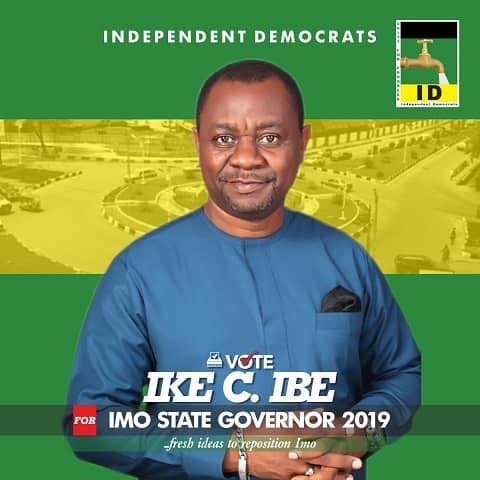 A salt does not look like other ingredients, sends out no aroma like other seasonings, but without it, the soup is tasteless.

Their results speak for them, not their propaganda.

You don’t need to shout to be heard, people keep quite to listen to intelligent people.

A salt maintains its integrity amidst pollution.

Have you seen where a salt buyer demands to taste it before buying?; because salt has proved its integrity over the ages.

Our Lord and Savior Jesus said we are the salt of the earth.

If you will need to swear before people believe you, it then means, you lack integrity.

Is your life a salt to the earth or an insult to Jesus?

The easiest and only way the salt can lose its taste is when mixed up.

Be a salt to your generation/humanity and not an insult …..

As an Imolite and a law abiding citizen, *Ike C. Ibe* remains incorruptible, possesses a flawless and impeccable qualities that will transform IMO State to its highly estimated ranking within States of Nigeria and beyond.

He will achieve this feat speedily within *Four (4) Years* of his administration with a high level of diligence and empathy/ concentration to the attentive longings of all Imolites by fully honouring them with their rights and all the niceties that backs up a Democratic Government.

In all honesty, we submit that in the circumvented, insightful and salted worthy character found to be innate and inborn in *Hon. Ike C. Ibe,* IMO State will be able to restore its integrity as not only the most redefined state in the Eastern Oriental part of Nigeria but one of the reputable and industrious state of the art places in Nigeria with a serene, peaceful, lucrative and habitable environment for all.

We urge all Imolites not to miss out on this auspicious opportunity to vote wisely and elect *IKE C. IBE* in 2019 in order to exempt everyone from enduring another avoidable hardship for the incoming four years.

In the affirmative, we all can attest to the fact that our dearest State of Imo is still redeemable …..

For IMO State to be redeemed, it must be handed over to only *A Capable Hand* to manage it ….. *A Hand with a Midas Touch* …..

Together, we will rejig the deplorable state of IMO ….

Together, we will restore IMO to its foundational blueprint for a comfortable life of opulence for all …..

Join me *IKE C. IBE as an INDEPENDENT* *DEMOCRAT* in my quest, undying zeal and genuine aspiration to govern IMO from 29th May, 2019 ……

God helping us, it shall end in Thanksgiving for all of us ……