You are here: Home › NEWS › An account of the betrayal by former SGI, George Eche.

What you are about to read is an account of the events that led to the fallout between the Government of Imo state and former SGI, George Eche. 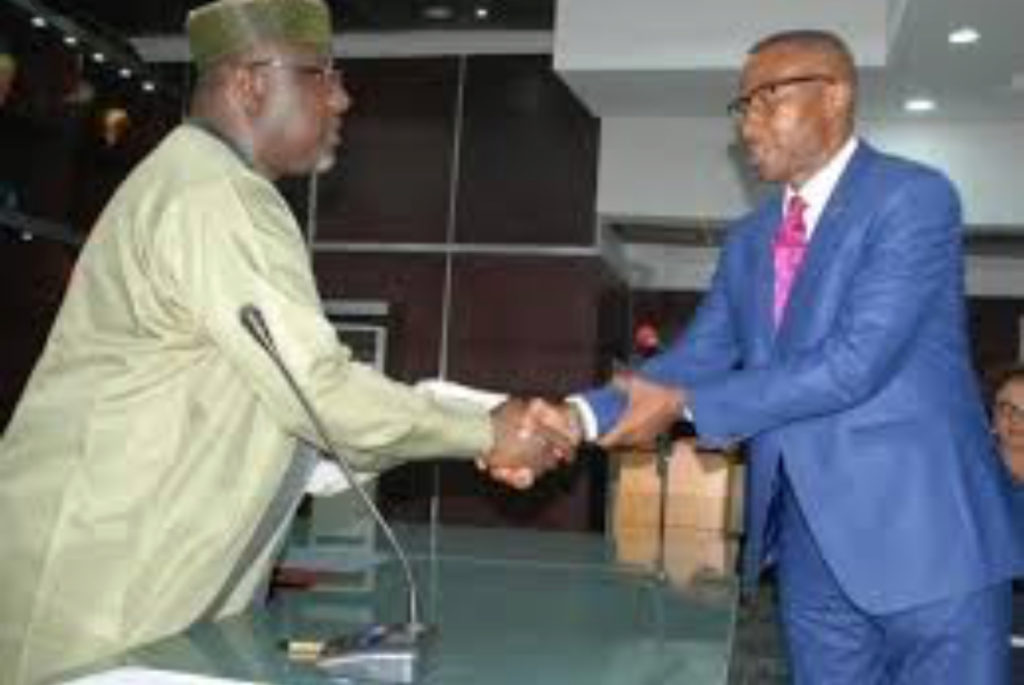 George Ezenna Uchenna Eche from Umuwaoma Obiangwu in Ngor Okpala Local Government was once a Permanent Secretary. He was also the Accountant General of the State. He just left few days ago as the Secretary to the Government of Imo State. If you ask about my opinion on him, I would say he was able to reach the peak of his Civil Service Career. He is a successful man looking at these feats. He is also a billionaire in naira. I do not know his worth in other Currencies of the World like Dollars, Pounds and Euro. In other words, he is a comfortable man. And equally a wealthy man. Physically looking, he is a fine man with attractive height, baby-face and “Figure eight” if she is to be a woman. But he has flat lips meant for gossiping.

George Eche is a Knight of St. John International of the Catholic Church. Which means, in the Catholic Church too, he is up there. He has OND and HND of the Federal Polytechnic Nekede, and MBA of the Imo State University. In the academic world, he is also present. In his Civil Service life, he grew from the ranks having enrolled into the Civil Service system in 1989. His God is awake in his chosen vocation. Chi ya mu anya. He could be said to have arrived. He is a big man looking at his growth and achievements. Some people would wish to be like him except yours truly. And I tell you why.

George Eche obviously lacks one thing. And that thing he lacks is Key. It is superior to all the education, positions, money, etal. To me the man lacks Will – Power or Principle. You can also call it strong Character. When you have everything and lack Credo or Principle or strong Character, you lack all. All you have are meaningless. And it takes a man without Principle to act the way Eche had acted. He seems not to believe in anything. That is the ugly tale of Eche. What makes a man thick is inside and not material possessions. Reason being that when you loose these material things today, you can have them tomorrow. But when you loose the “inner man” today you can’t get it tomorrow.

The issue is not Eche Contesting the governorship of the State. Afterall, he is a Nigerian. He has that Constitutional right to Contest any position he feels he can vie for. The issue goes beyond Eche’s governorship bid. The case is not also whether he would become governor or not, since he cannot. Those who applaud men like Eche are also like them, and people should be careful with such elements.

Prince Eze Madumere was keen to run for the governorship. He never Concealed that ambition. He didn’t pretend about it. He announced his interest early enough even when most of us felt that he would not have done that without the approval of the man who made him. But that is our own opinion. But the Crux of the whole thing is that he never pretended about his ambition. He was open. He never betrayed any emotion. He left and declared his Political War and has been fighting that War to the best of his knowledge and ability. Whether he will loose or win is not the issue. If you ask me Madumere is driven by inordinate ambition. Ditto Jude Ejiogu.

But Eche’s case is something else. He stayed put all these while. Declared his intention to Contest the House of Representatives election for Aboh Mbaise/Ngor Okpala Federal Constituency. He was setting his structures and we all felt he was doing so for the House of Representatives stuff not knowing that he was being very deceitful, tricky and funny. At meetings, he would be very vocal in Condemning the actions of Madumere and Ejiogu. And we innocently believed him not knowing that he was laughing at everybody.

At meetings too, he would be the first to tell us that we must all queue behind Uche Nwosu. We would echo and saw him as a very Compassionate and Sincere ally. He would be the first to begin to sing for the delight of all “On your mandate we shall stand…”, with his right hand up like the choirmaster of the Rescue Mission Choir. Nobody doubted the sincerity of Eche except Sam Onwuemeodo (myself). I didn’t know that TOE Ekechi was standing behind me one day at Sipbat, when Owelle gave Eche a very sensitive assignment, and I told the governor that Eche does not look like someone that can be steadfast or trusted to be given such sensitive details or jobs. Whether the governor believed me or not is what I cannot tell here. The guy is foxy and exceptionally stingy. Onwere aka gum. Dog does not eat his waste or faeces. Owu onye aka okpoo. He has glued hand.

Eche does not like me. And I tell people that anybody who hates me is not at peace with himself. When your Spirit is fully yielded in things of God, you have the anointing power that manifests in your Spirit, on your lips/tongues and your face and even hands. So, when the wicked one sees your face, he or she does not feel comfortable. He or she feels threatened. He was only tolerating me because in the system he Could not afford to avoid me totally. That would have been at his own risk.

I still have the feeling that Eche was the brain behind Lambert Ojukwu’s faction of the Publishers’ Association. I also Confronted him when he altered the list of the ten women from my Mbutu ward given one hundred thousand naira each for empowerment. To undo me, he began to work with my former ward Chairman. I resisted him and ensured that the ten women I submitted their names got the money. He didn’t know much about me so when he came to know me he decided to down tool. He also assisted members of the Ojukwu led faction of INPA to meet with the Governor through one of his in-laws, Geraldine.

At the meeting, he unveiled his governorship bid when he was called up to talk as a House of Representatives’ Aspirant for Aboh Mbaise/Ngor Okpala Federal Constituency. But he made a U-turn. And began to speak in diverse tongues. Both Greek, Efik, Ijaw, Yoruba, Hausa etc. He frowned his face and threw the bomb. Everybody was shocked. And it was discovered later that he had already bought the APC governorship nomination forms 48hours before the meeting, unknown to everybody. And we moved further, and also discovered that on all his billboards, he never indicated the position he wants to Contest and he would also make Uche Nwosu’s picture smaller. This guy Called Eche is a case – study. If he is an animal he would compete with tortoise. He must have been the inventor of the word trick or deceit.

The question of what must have given Eche the audacity to do what he did has also come up in some quarters. It was also known that abinitio he had sympathy for the Coalition group and was said to be one of the financiers of the clique. And the manner with which he paid Courtesy Call in Abuja on Jasper Azuatalam, one of the key figures behind the Coalition and pledged loyalty, only confirmed that information. He has been with them and must have been feeding them with information whether true or false on the Rescue Mission government.

So the speed with which he ran to the Coalition Leaders could only throw light on where his strength lies. They must have brain-washed him and assured him that they would make him governor. They must have also taken him to some APC bigwigs from other areas or close to the presidency in Abuja and painted a very beautiful and believable picture for him and he saw himself as Owelle’s Successor. He could also be a victim of some prophetic utterances by some of these “men of God”. Some of the aspirants have anchored their victories or ambitions on prophecies. He was said to be a regular visitor to Port-Harcourt. Who knows whether he has been going to PHC to meet with O.O. Ogbu (Olumba, Olumba), or Ibeyiome or any other prophet or prophetess. And they must have told him “Thus said the LORD…” To say the least, he has entered “One Chance” Bus.

Eche is a billionaire. And since he does not give out, or since he is stingy, this might be a way of reducing the weight of his fat pocket. Politics is “Imara nkaa, Ima nke ozo”. Politique. You ask yourself how many governors would this Coalition enclave produce in Imo? Madumere has been with them. Likewise Jude Ejiogu and Peter Gbujie. Hope Uzodinma has taken over from Ifeanyi Araraume as their leader and he has also obtained his nomination forms for the governorship. And if the Coalition can make someone governor, all things being equal, will they leave those who have been with them right from the outset to settle for a man who was receiving his salary and impress from the Rescue Mission Government till the month of August 2018.

For Eche, he has betrayed Rochas Okorocha. He has also shown ingratitude. The way he announced his governorship ambition was another way of not appreciating all that Rochas did for him. And all the money he has made is under Rochas. And if Rochas didn’t bring him up he would not have imagined talking about Councillorship in Ngor/Okpala. And that is the reason his guber ambition cannot fly. It died on arrival, because he is going to use the money he made under Rochas for the election. By paying Courtesy Call on the Political enemies of Rochas and pledging loyality to them and people who were not there when Rochas elevated and empowered him, he has misappropriated every goodwill accruing thereto. And anybody following him is just to see what he or she can grab or pick from him. He does not have what it takes to be governor. Real men do not say “A” when they want to say or should say “B”. They would always raise their fingers to be counted. They do not pretend over what they believe in. Any one supporting him is also fickle – minded. Men with no Colour. They are Coat of many Colours. Like I had earlier said, let Eche become the President of the United Nations or African Union, European Union or Arab League, he is not attractive to me. A member of the House of Representatives attaches “Honourable” to his name and a governor goes with “His Excellency” I do not think that Eche is qualified to answer either “Honourable” or “His Excellency”. At the burial of Ceasar, in Shakepares’ Julius Ceasar, Mark Anthony told his audience that he has “Come to bury Ceasar and not praise him. That the evil that men do lives after them”. And I add a proviso… “and also lives with them”. Afterall, one reaps what he or she sows. But we must Continue to Clap for Jesus, the Son of God.

2 Responses to "An account of the betrayal by former SGI, George Eche."