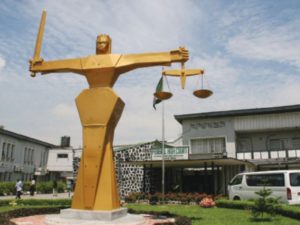 ACT 2 SCENE 1: A Federal High Court sitting in Owerri, the Imo State capital has nullified wards, Local Government and state congresses of the state chapter of the All Progressives Congress, APC. The presiding judge of the court, Lewis ordered for fresh congresses in the state. Allagoa, in a judgment that lasted for an hour, ordered APC, “to be responsible, save our democracy by conducting free and fair congresses in Imo State.”

He dismissed a motion filed by the defendants, insisting that his court had jurisdiction to hear the matter. According to him, the exhibits tendered by the plaintiffs suggesting that there was no ward congress in the state on May 5, “was factual.” The judge said that the recorded “press interview between the state commissioner of police, the state governor, Rochas Okorocha and Senator Osita Izunaso that there was no APC ward congress in Imo State on May 5 “was justifiable in law.”

Allagoa cited a report of the Independent National Electoral Commission, which confirmed that there was no APC ward congress in Imo State on May 5. The judge said, “APC should go and be responsible and save our democracy. The defendants and the plaintiffs are members of the same political party, APC. There is no victor, no vanquished.”

The plaintiffs, who are a faction of the party loyal to the state governor, had approached the court seeking, among other things, a “declaration that the ward congress of the APC in Imo State which was fixed for May 5 was inconclusive and did not hold, since there was no result therefrom.”