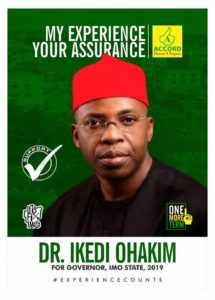 His Excellency Dr. Ikedi Ohakim, the governorship candidate of Accord, has appointed Dr. Kelechi Okpaleke the Director of Publicity and Communication Strategy for the Accord 2019 Governorship Campaign.

He was also appointed the Director General of Imo State Orientation Agency and later S. A. on Public Enlightenment by Governor Okorocha.

A respected figure in Okigwe Zone, he comes from Onuimo Local Government Area of the state. He is a graduate of Winona University, with a Bachelor degree in Paralebgil, Philosophy and a Master degree in Public Policy. He also has a Duris Doctorate degree from William Mitchel College of Law, ST, Paul Minnesota, also known as the Harvard School of the Mid-West).

Known for his commitment to the betterment of Imo State, he will bring his longs years of experience in public service and Public Policy formulation to bear in his new assignment.