You are here: Home › NEWS › OPINION: Why Ihedioha is afraid of Sam Onwuemaedo – By Onwuasoanya FCC Jones.

If Chief Emeka Ihedioha has dissipated half the energy he has devoted to fighting his kinsman and political albatross, Sam Onwuemeodo, in working for the State, maybe, by now, he would have been able to fix the road leading to his house from Owerri, which of course, was allegedly destroyed by men working for him.

In the last three months, Chief Ihedioha is suspected to have invested over 300 million Naira of Imo money in attempts to shut Sam Onwuemeodo up. But the more he throws his petty missiles against Onwuemeodo, the more daring Onwuemeodo becomes in the defense of good governance.

Onwuemeodo who is the publisher of the popular Whitepaper newspaper and Chief Press Secretary to the immediate past governor of Imo State, is seen as posing a most portent threat against the highly unpopular, inept and unfocused Ihedioha administration, hence the arrays of attacks against him.

As a classmate and kinsman of Ihedioha, Sam Onwuemeodo was a lot more brilliant at school and would always top the class, while Ihedioha would always come behind him academically. There is even this story around circles familiar with the relationship between the duo, that Onwuemeodo was helping Ihedioha to solve some school works, as the now Imo governor did not enjoy the gift of academic brilliance. 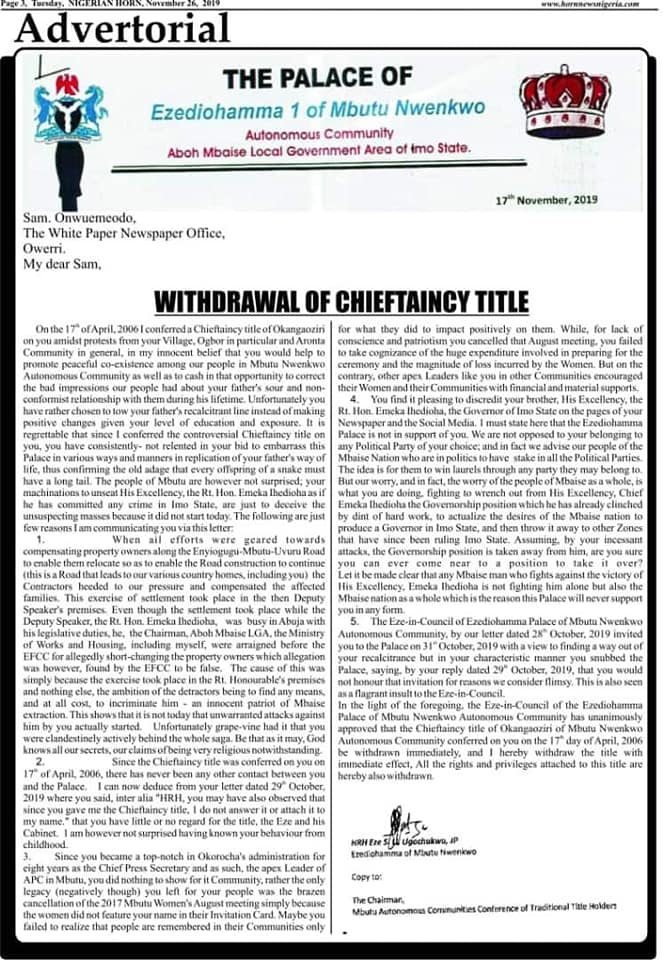 Ihedioha cannot deny a direct involvement and sponsorship of what has become most embarrassing and petty charades against Onwuemeodo. The Transition Committee Chairman of Aboh-Mbaise was the initiator of the first major attack against the veteran journalist, when he led some disgraceful traditional rulers to declare Onwuemeodo as a ‘personae non grata”. These traditional rulers went a step further by pouring libations to some demons calling on them to destroy anyone from Mbaise who is not supporting Ihedioha’s tainted governorship. As if that is not enough, they also banned Whitepaper newspaper from being sold anywhere in Mbaise, and just this morning, Eze Ugochukwu who is the traditional ruler for both Ihedioha and Onwuemeodo wrote a letter, stripping Onwuemeodo of his chieftaincy title. In all this, Ihedioha has never been heard uttering a word of caution against these disgraceful individuals and their actions. This clears every doubt that these petty actions were directed by him.

Apart from Onwuemeodo’s towering integrity and academic brilliance against Ihedioha’s doubtful integrity and alleged third class academic rating, Onwuemeodo is also said to command more respect from among Mbaise people. It is believed that in any free and fair election in Mbaise today, Onwuemeodo will beat Emeka hands down.

Ihedioha’s apprehension over Onwuemeodo did not start today. It is believed that long before he became governor, he had allegedly ordered actions that would have led to Onwuemeodo’s death, but for God’s intervention. During the 2015 elections, the then Deputy Speaker of the House of Representatives was said to have ordered some officers of the Nigerian Army to abduct, torture and possibly eliminate Sam Onwuemeodo.

Ihedioha may be governor today in Imo State, while Sam Onwuemeodo is just a journalist and publisher, but certainly, Ihedioha is unsettled by the fact that this simple journalist commands more respect among Imo people, than him, who is the governor.