You are here: Home › NEWS › Uzodinma and the Battles Within – By Henry Ekpe 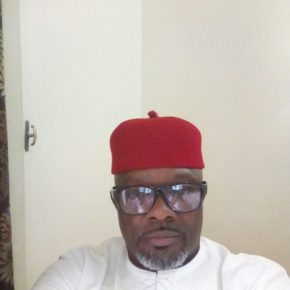 Imo State is a unique State. This is because number of its educated people. Whoever is the Governor of the State at any given time already has a big task in his hands. In other words, the State Chief Executive inherits myriads of challenges to face, and therefore can only be inviting more headaches if he fishes for more distractions.

The present Governor of Imo State, Senator Hope Uzodinma has spent six months already in office, but political battles have taken a major chunk of the time he would have used to tackle the various problems facing Imo State and its suffering citizens.
Some of these troubles were the ones Uzodinma met in office, while some are those he courted by himself.

As it stands today, after six months in office, Uzodinma is yet to “Land”, following the ugly situation on ground, as a majority of Imo populace are yet to know the direction of the Uzodinma administration.

While nobody expects Uzodinma’s legion of Aides to tell the Governor the truth, because their sources of income are in danger should they do that, it however lies on those who Love Imo State, but do not depend on Government to feed, to tell the Governor the stark facts, since the Governor himself may not know, as he is cocooned in his office and likely may not get first hand feelers from the poor Imo masses.

From the way and manner Uzodinma’s Aides lampooned the six months the PDP and Ihedioha spent in office, including probing the short period they stayed in Government House Owerri, Imo people were expecting something special from Uzodinma’s six months in office. They were getting set for a utopian elderado for the Imo masses. But rather the situation is even more despicable to believe.

It has been difficult for Uzodinma to pay pensioners, civil servants lament of unpaid salaries, workers of the various Government Agencies and High Institutions demonstrate over unpaid salaries, contractors take to the streets demanding for pay. These are indications that things are not moving in the right direction, as we witnessed these societal upheavals in Imo last during the Governor Rochas Okorocha era.

While I am not here to pour salt on an already festering wound, I only want to let the Governor know that whatever his sychonpantic Aides may have been telling him, he should raise his head and look out through the window. He will see the real Imo State.

What he sees will shock him that he has not been getting the correct information.
Against all the threats against my life, I will continue doing my job as a Stakeholder in Imo State, because a better Imo is for all the citizens, both those in APC and those not.
According to Pastor Martin Niemoller of Russia “First they came for the Communists, and I did not speak out because I wasn’t a Communist. Then they came for the Trade Unionists and I did not speak out because I was not a Trade Unionist.

So let us speak out and face Death.
Following the consequences that led to his ascension to office, many had expected that Governor Uzodinma would focus on those ideals that would cool frayed nerves, unite Imo people and restore peace in the entire State, which would have given him the enabling environment to settle down in office and pursue good policies that would endear him to the heart of Imo people.

Although Uzodinma began on a good note, by facing Governance and not being distracted with frivolous issues. For the first two months, he worked like a Statesman and many heaved a sigh of relief with his focus and conduct.
But suddenly, the political Hawks have turned his face to unnecessary political battles that raise tension in the State and attract millions of naira to quell them, while Governance suffers.

Uzodinma was lucky, because before he arrived Ihedioha had cleaned the augean stable, and set every sector rolling. All he needed to do is to keep to his earlier injunction that he would follow the steps of his predecessor. But that could not be, because those around the Governor will have to earn their livings. They must tell him why he should toe his own line. Now, Imo is starting afresh. And it has not been easy for all.

Today Uzodinma is facing many challenges. Apart from the herculean task of putting Imo Economy on its footing, and be able to pay at least workers seamlessly every month, there are too many political war fronts for the Governor.

The worst is the intraparty squabble between the Governor and other forces in Imo APC. The truth remains that Uzodinma is the Governor of Imo State, under APC. But, Imo APC was in existence before he arrived the party. The progenitor of Imo APC is Senator Rochas Okorocha, who was there when the party was birthed. Apart from Okorocha, there is the Coalition Group led by Prince Eze Madumere, former Imo Deputy Governor, who led the splinter Group that revolted against Okorocha, their Leader.

All these happened even before Uzodinma came into the party, and was the major beneficiary, because it was this division between the core Okorocha Group that afforded Uzodinma the opportunity to pick APC ticket.

For starters, the war between Uzodinma and these Groups is just commencing, as days ahead will be more tumultuous and ferocious as Uzodinma engage them in real Battle.
There is the case of the former elected LGA chairmen under Okorocha. Court has returned them to office, but Uzodinma is now, busy trying to block them from gaining entrance into the Council Areas.

Already, Uzodinma has been battling with Imo PDP on one hand and former Governor Emeka Ihedioha on the other hand.

While he rakes up various allegations against the Ihedioha administration with one hand, he wants to cage Imo PDP, the major opposition party in the State with the other hand.
Therefore, it was in a bid to cow and cage Imo PDP that the Director General, New Media of Imo PDP, was nearly jailed if not for the vigilance of Imo PDP.

Even the vehicles given the PDP by the previous administration was commandeer in commando fashion from the PDP State office to Government House, Owerri.
Imo has had many Governors in the State and many of them had monikers and no one was ever hounded or hunted and detained. Ohakim was called Ikiri and Okorocha’s are too many to mention. But these Governors faced their main mandate, which is to provide security, and Bread on the table of every Imo citizen.

Now, a certain Governorship candidate of the Reform and Advancement Party, RAP, Bar Kingdom Okere has dragged Governor Uzodinma to court seeking for interpretation of who really is the APC Governorship candidate in Imo State in the 2019 election.
Whether the litigation has merit or not, it is a distraction to Governor Uzodinma. Except the matter is thrown out, every litigation has the capacity to keep the parties involved busy both financially and otherwise.

While still on the RAP issue, court yesterday threw away Marcon Nlemigbo’s suit challenging the Dan Nwafor Executive in Imo APC. This is a serious one, because it was the Marcon Nlemigbo Executive that organized the Imo APC Guber primaries which gave ticket to Uzodinma.

Unfortunately, the Uzodinma administration that is grappling with many challenges ought to have had concerted concentration on Governance, since it is not uhuru yet for the Government, which can be measured by the level of activities and successes of Government recorded in the various sectors in Imo.

The most important problem facing Uzodinma is Imo populace, represented by the pensioners and Imo workers in a “Civil Service” State like Imo. Imo has no factories or companies, and its work force is mainly in the civil service. Therefore, any administration that does not see Imo workers as a priority has failed. It is the salaries of Imo workers and whatever that is generated at Ekeonunwa market, Relief Market, and New Market all in Owerri, that oil the Engine of Imo Economy.
Therefore, if Uzodinma wants to succeed in office, he must conquer these mentioned devils. For now, Imo people are yet to see where his Government is headed. Nothing is happening yet except for frequent Radio and Television outings of his Aides, where they run into confusions to the chagrin of the masses. The Government could be busy, but it has not yet reflected on the masses. Imo people, as I earlier said are sophiscated, and cannot be cowed. The moment Uzodinma begins to perform, he will see the reaction of the masses right from whenever he lands Imo Airport.

The Hawks around him will continue to shut him out of the reality on ground. And most of these people making noise are not even the core Uzodinma followers. The real Uzodinma people are those busy trying their best in the various offices.

The major Noise makers came from PDP and playing to the gallery, looking for the Governor’s attention. If you know you are doing well, you don’t need your Boss attention. And these set of Uzodinma’s Aides are ready to jettison him any time. They have nothing at stake as usual except their stomachs.

The issue of pension and workers payment exposed the under belly of the Uzodinma Government and has not been properly managed.

While the Commissioner for Information said there was no money to pay, the Commissioner for Finance said there was fund, only that he was waiting for Governor’s directive, and the SSG told the demonstrating pensioners that they will get their pay “this week”. Three different speeches from three senior Government officers, on same issue. That is a Government speaking in Tongues. Tower of Babel.

We are still waiting, since the Governor has reassured Imo populace.