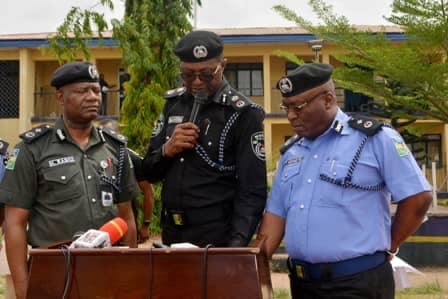 It has come to the notice of Imo State Police Command that some group of persons have concluded plans to use the intending return/visit of Rt. Hon. Emeka Ihedioha to Imo state on thursday 12/3/2020, to forment trouble and as such cause breach of public peace in the state. While acknowledging the right of Rt. Hon.Emeka Ihedioha as well as every citizen of this state to exercise their freedom of movement as enshrined in the constitution of the Federal Republic of Nigeria.

The command wishes to warn that there should be no rally, gathering or assembly of any kind in relation to the visit. This is to avoid such being hijacked or used by mischief makers to cause chaos or such rallies, gathering or assembly snowballing into breach of peace. The command also uses this medium to warn the supporters of both parties (immediate past/present governments) to maintain decorum and law and order.
The general public is therefore advised not to allow themselves to be used by anyone or group to forment as anyone found culpable will be made to face the wrath of the law.

“Ndi Imo” are hereby advised to go about their lawful business without fear of molestation as the command’s resolve to protect the lives and properties of Imolites remains absolute, please.