You are here: Home › NEWS › Uzodinma Reiterates Commitment to Payment of Pensioners in Imo

Uzodimma Reiterates Commitment to Payment of Pensioners in Imo

·          AS NLC Dissociates itself from Pension Protest, Warns against Sabotage 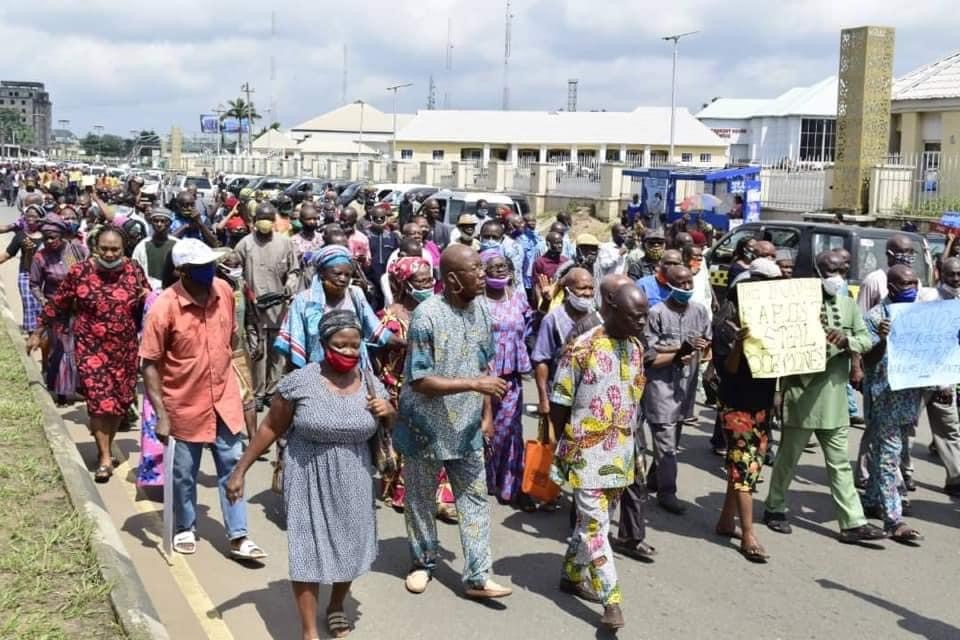 Imo State Governor, Distinguished Senator Hope Uzodimma has reiterated his commitment to the payment of pensioners in the state.

The Governor did on Tuesday when a group under the auspices of Imo Pensioners Association led a peaceful protest to the Government House, Owerri, to appeal to Governor Uzodimma to fast-track the processes he has put in place to clear the backlog of pensions being owed them.

Represented by the Secretary to the Government of Imo State, Chief Cosmas Iwu, Governor Uzodimma reminded the retirees that the delay in the payment of their pensions was majorly due to discrepancies in their names and challenges relating to payment vouchers.

Governor Uzodimma said discrepancies were discovered in the pension’s payroll system inherited by the current administration. “Some pensioners names appeared twice with different amount of money and even BVN numbers.”

He promised that the solution to the problem is almost completed and urged the pensioner to exercise a little more patience so that the problem can be solved once and for all.

He appealed to them not to be too aggrieved against the government as the temporary delay is to put things straight and ensure that the right persons get what belongs to them.

The Governor regretted that the process of cleaning up the mess in the State pension payment has lingered unexpectedly, but assured that he was not resting in his oars to ensure that he puts smile on the faces of the pensioners.

Governor Uzodimma thanked them for the peaceful protest and for exhibiting maturity and elderly disposition for which they are known. He prayed for all of them to be alive to continue in their fatherly and motherly  advice to the State.

Earlier, Leader of the pension association, Comrade Iyke Ohaneje read out a catalogue of the challenges the members have been having as a result of the delay in the payment.

He said they chose the option of the peaceful protest having written several letters to the authorities on the need to invite them for negotiation and clarification on what is actually delaying the payment of their pensions.

Comrade Ohaneje said they were not necessarily moving round Owerri to be paid their pensions, but “to beg for food and money which they hope to use in helping the poorest of the poor among them.”

He pleaded with the government to urgently come to their rescue as many of them have become vulnerable as a result of lack of money to attend to their basic needs.

He said 49 of their members have died in the past four months, saying the situation is actually pathetic and disheartening. He appealed to government to see reason to pay them.

Meanwhile, the Imo State President of Nigeria Labour Congress (NLC), Comrade Austin Chilakpu, has dissociated the Labour Union from any protest by pensioners in the State.

In a statement in Owerri Tuesday, Chilakpu said the NLC has been dialoguing with the State Government on the pension issue and was aware  that there were still a number of contentious entries on the pension payroll which the government is sorting out to ensure a comprehensive clean pensioners’ list. He also said the government has assured Labour that all outstanding pensions will be paid soon.

He said the NLC will soon address the public on the rot in the pension scheme and appealed to the pensioners to exercise a little patience because he was sure that the issues will soon be resolved and outstanding pensions paid.

He however emphasized that the Union was not in support of protests because the pensioners may unwittingly make themselves vulnerable for infiltration by those who do not mean well for them, adding that the protesters did get approval from neither NLC nor the police to embark on any protests.